Flowers in the Victorian Garden 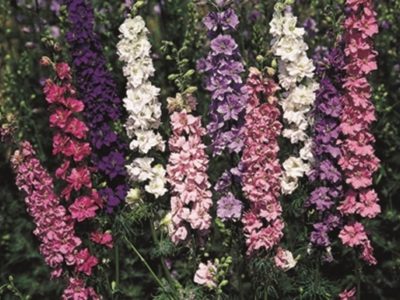 Unprecedented advances in technology and worldwide botanical expeditions dramatically increased the varieties of plants that could be grown in Britain, with unusual and exotic specimens being highly prized.

In the early days of Victoria’s reign, formal and well-ordered gardens were fashionable, but throughout the later Victorian period nostalgic country-cottage-style gardens increased in popularity in reaction against rapid industrialisation.

With their beautiful colours and spectacular flowers, Candytuft, Larkspur and Canterbury Bells became favourites of the Victorian family garden.

Canterbury bells begin as low growing rosette-shaped foliage, from which shoot up flamboyant flowers atop tall stems. The teacup-shaped blooms are evocative of a country cottage garden, and would be recognised by a Victorian as a symbol of gratitude.

Candytuft's delicate scented flowers in white and pink symbolised ‘indifference’ in the Victorian era. They have an upright plant habit, produce strong stems and are suited as cut flowers. Pruning back the stems after blooming will encourage more growth.

Larkspur’s elegant spikes of showy flowers add colour and drama to the summer garden. Victorian flower dictionaries translate the meaning of larkspur as both ‘open-heartedness’ and ‘Fickleness,’ which may have led to some confusion. It’s wise to stake young larkspur plants to help the tall stalks support heavy heads of flowers.

I found It In Space